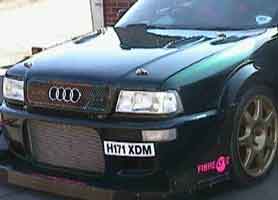 In reality, a car is transportaton. Cars were meant to provide transporation. Everything else it is made out to be is just pure hype.

Sure, you want to show-off. However, it can be done later when you can afford it. First things first. You must concentrate on being financially sound. The thing to do is to buy a car that serves the purpose of transportation, but which is also reliable, and requires almost no expenditure other than the cost of fuel. In a matter of a short time, after you have achieved financial security, you can then decide to get into new cars. Invest the saved money in appreciating assets, and join the list of millionaires in your city. Makes sense ? It's about getting your priorities in right order. Life and living beomes a breeze then. Only a true friend would advise you this. Money saved is money earned.

Let me give you a comparision of three hypothetical scenarios:

Look at the difference in the scenarios, a, b and c shown above . A word to the wise is enough.

Please bear in mind that the final price of any car no matter how expensive is near zero, which is it's salvage value. Cars are depreciating assets. Showing off with new cars never got anyone ahead. Most people buy new cars and replace them with new cars every 2-4 years throughout their lives and spend more than half of their lives paying the $200,000 or so (in present value) in their lifetimes excluding repairs, insurance and fuel costs. This is where they lose their life's dream. Why slave your life away in buying costly cars - cars that often turn up as lemons ? Often to be replaced by other lemons ! Moreover, the risk of losing your megabuckmobiles to repossessions is high due to job losses and missed payments. And guess what cars are stolen often at the point of a gun ? New cars. The risk one runs after buying a new car is way way high. Do you really have that kind of money to throw away and become a mental wreck not to mention of risking your life ? There is no need to spend a fortune and your sanity on this destructive cycle. And don't let anyone tell you otherwise.

Did you also know that some car companies design built-in obsolescense in their cars to self-destruct after a pre-set period - just so you keep buying their jinxed new cars ? Talk about spinning your wheels. The same car makers also offer low to zero interest loans and fancy sales packages to mislead people into buying their 'white elephants'. All designed to siphon your hard earned money year after year and send you to the poor-house. Why spend a lifetime before realizing this ! Who doesn't have 20-20 hindsight ? A 20-20 foresight is what people need ?

You will be amazed how great a car you can buy for next to nothing that runs without breakdowns for decades. Save all that money you made slaving year after year, so you can amount to something. Instead invest it in your own favorite real-estate and enjoy life. Imagine getting wealthy right off the bat after your very first job.

Make sure you don't ever buy just any used car. Used cars can be lemons too. Don't know the next thing about which make/model to

buy ? Leave it to us ! In one easy reading session, we will show you where to look and how to cherry-pick your golden used car for next to nothing that looks and drives like a million; and which to avoid like the plague; what to look for and tips on keep it running trouble-free literally forever. Drive it till the wheels fall off... If you are a young girl, a divorced lady on limited income, a very young man or an immigrant in a new country or even a novice with cars and lack information, and looking for a no-cost super car, you need our info. asap. No need to ask and get incomplete, misleading or just plain bad advice on cars or get burned with corrupt and mouthy car salesmen pointing you to worthless and expensive junk. Our recommended cars are easily available throughout the world.

Make no costly car-mistakes. Drive straight to wealth and success. We show it all in our instant ebook package.

As a BONUS we will also show how you could increase the car mileage by 6-10% (save petrol) using a simple home-made gadget that costs less than a dollar that would run your car smooth as silk and increase engine life.

Hurry and order for your no-cost car now ! It is the next best to a car that runs on water (free).

PS: My wife and I drove our two used cars (a 1980 and a 1982 model) that we bought used and ran them both every day for more than 20 years even after one of them was wrecked three times while parked on the street. And the cars still ran flawlessly both of which I recently gave away to needy immigrant friends. And from what I hear they are still running showroom shape today as I write this !

And in all the time I did not spend a dime in any repair on them. Imagine, us saving all that money we made for over 20 years. And yes, today we are millionaires. We owe it to those two cars. We are living proof. Order for this millionaire-maker today ! I DARE YOU !